Pluto with an Iron Core 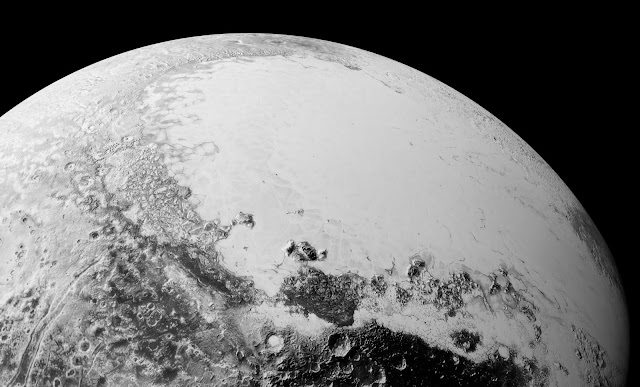 Observations of Pluto and Charon by NASA’s New Horizons spacecraft show the presence of numerous geologically young surface features which serve as evidence for recent geological activity. For example, Pluto has enormous ice mountains ~3 km in hight, and a large, craterless icy plain named Sputnik Planum. It is worth considering whether the presence of an iron core in Pluto and in Charon may have given rise to the geological features seen on their surfaces.

Since all inner planets in the Solar System, including the Moon, have iron-rich cores, it is not improbable for Pluto and Charon to also possess iron cores. Interior models of Pluto and Charon typically have two components - a rocky core and an overlying shell of ice. The presence of an iron core will mean a three component interior structure consisting of an iron core, a rocky mantle and an outer shell of ice. Just after formation, the interior of Pluto was supposedly much hotter than it currently is, and may have supported a molten iron core.

As Pluto cools, its iron core solidifies inwards, beginning from the core-rock boundary. Since molten iron is denser than solid iron, the iron core contracts and rock from the mantle above descends to occupy the space that becomes available. To fill the space created by the descending rock, some of the ice at the rock-ice boundary descends as well. Such a process occurring on Pluto can also occur, possibly to a lesser extend, on Charon. The descending ice at the rock-ice boundary can potentially create widespread surface deformations on Pluto and Charon, thereby explaining the many geologically young surface features observed by the New Horizons spacecraft.