There appears to be increasing evidence for the existence of isolated planetary-mass objects. These objects are either unbound (i.e. drifting alone in interstellar space) or orbit host stars in widely separated, distant orbits. Recently, Luhman (2014) reported the detection of a nearby brown dwarf with 3 to 10 times the mass of Jupiter and an estimated temperature of roughly 250K (-23°C). Such an object could have formed in-situ as stars do or it could be a planet that got ejected from its natal planetary system. 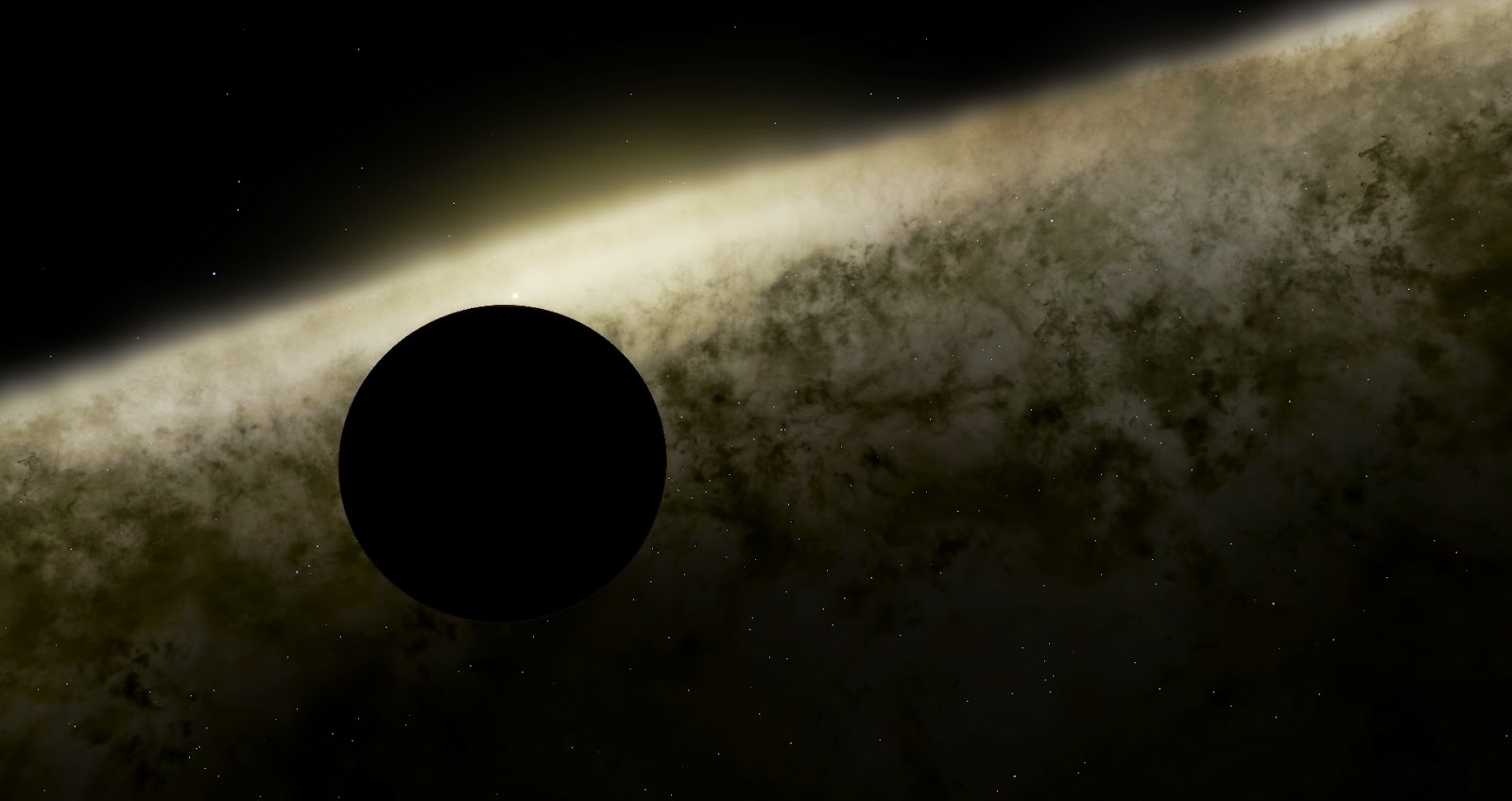 MOA-2011-BLG-274 was previously reported by Choi et al. (2012). One indication the lens could be a planetary-mass object is the short duration of the gravitational microlensing event. At any given time, the observed amount of magnification and the time of peak magnification vary slightly from point to point on the Earth’s surface. This is known as the terrestrial parallax effect and it is particular pronounced for short duration gravitational microlensing events.

Also, the data excludes the presence of a host star out to ~40 AU (i.e. 40 times the distance of Earth from the Sun). MOA-2011-BLG-274L is either an isolated planetary-mass object drifting in the depths of interstellar space or a planet in a far-flung orbit around a host star, sufficiently far out that the host star has no effect on the gravitational microlensing light curve.

A Hot Giant Planet as Black as Charcoal 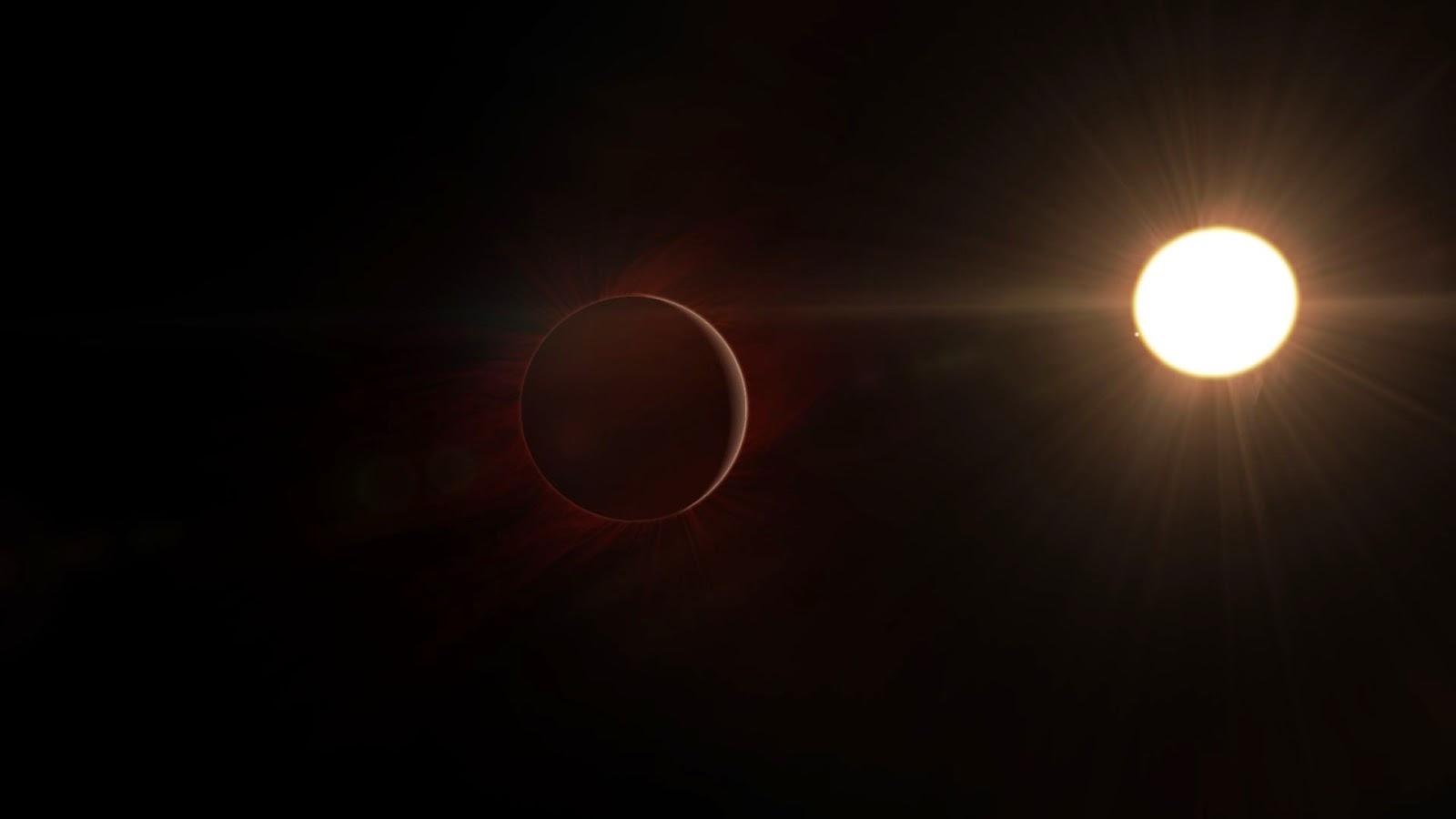 Even though Kepler-423b is as black as charcoal, the planet’s dayside would still appear utterly glaring. The extreme closeness to its host star means that the insolation the planet receives is a few hundred times more intense than what Earth receives from the Sun. Reflecting just a few percent of that intense insolation would still create nothing short of a blazing glare. Temperatures on the planet’s dayside can get as high as ~2000K.

At extreme densities, normal matter may exist in the form of strange quark matter (SQM). A consequence of this hypothesis is the existence of SQM stars which are hard to distinguish from neutron stars. SQM stars and neutron stars are both ultra-compact stars that measure only several kilometres across but can contain 1 to 2 times the Sun’s mass. Unlike neutron stars which have a minimum mass limit, SQM stars can have arbitrarily small masses. Since SQM is stable in bulk, planetary-mass clumps of SQM can exist (i.e. SQM planets). The detection of SQM planets would be very useful for testing the SQM hypothesis. 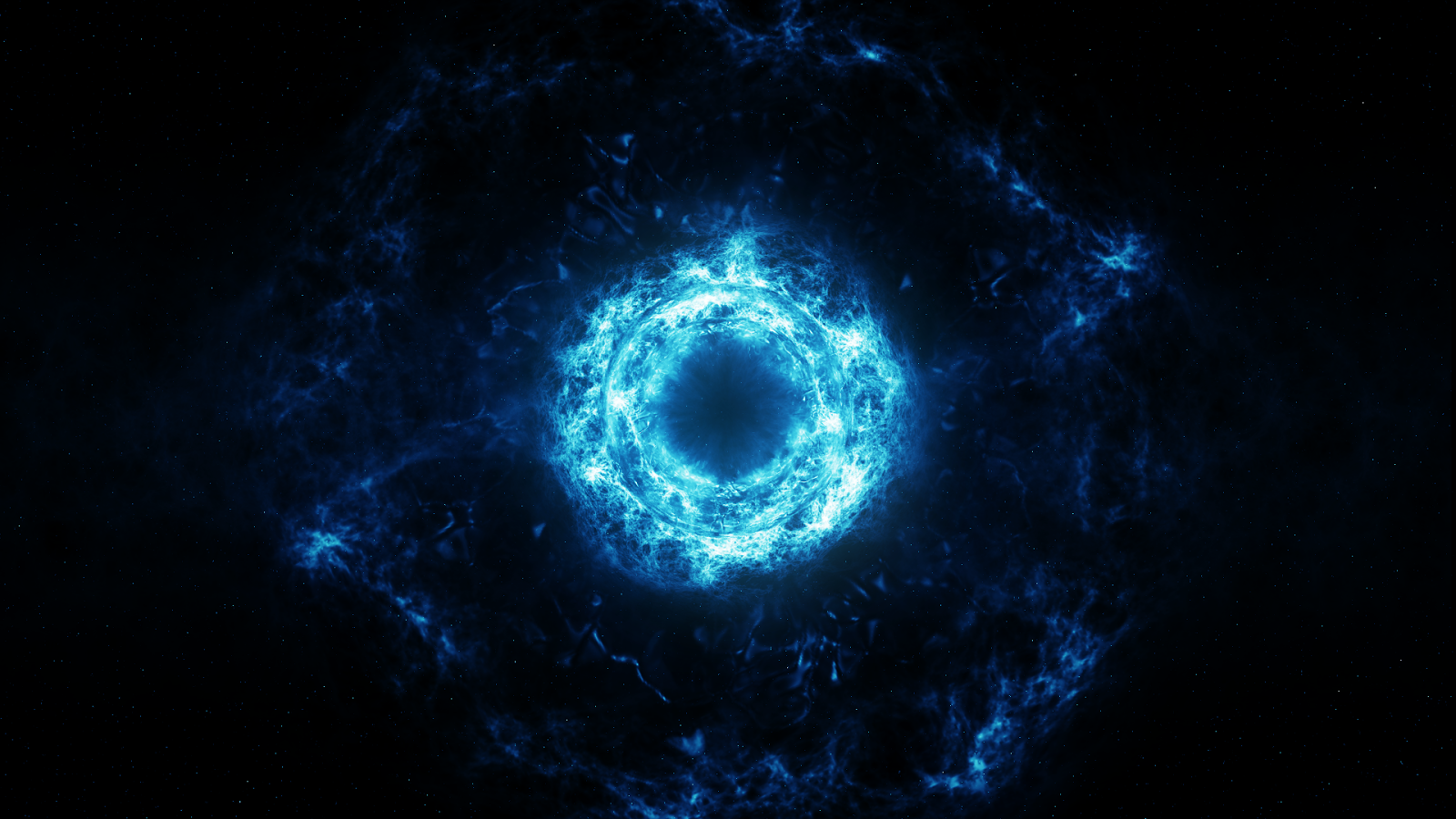 There are a number of possible mechanisms that can result in the formation of a SQM planet. One mechanism involves newly-born SQM stars that are very hot and exceedingly turbulent. The strong turbulence can eject planetary-mass clumps of SQM. If these clumps remain gravitationally bound, SQM planets are produced. A SQM planet with 1/10th the mass of Jupiter (i.e. 32 Earth masses) would measure only ~1000m in diameter.

Trio of Super-Earths Circling a Nearby Star

Following the failure of two of its four reaction wheels in May 2013, NASA’s planet-hunting Kepler space telescope was ingeniously repurposed for a new mission plan named K2. On 18 December 2014, it was announced that the K2 mission had detected its first confirmed exoplanet, a super-Earth or mini-Neptune designated HIP 116454 b (Vanderburg et al. 2014). The detection of HIP 116454 b was based on data collected during the testing run to prepare the space telescope for the nominal K2 mission.

Using data from the K2 mission covering 30 May to 21 August 2014, Crosseld et al. (2015) report the discovery of three super-Earths orbiting a nearby M dwarf star slightly larger than half the size of the Sun. This M dwarf star is designated EPIC 201367065 and it lies at a relatively nearby distance of about 150 light years. The three planets are 2.1, 1.7 and 1.5 times the size of Earth, and take 10.1, 24.6 and 44.6 days to circle the host star, respectively. From their sizes, the planets appear to span the range between rock-dominated “Earths/super-Earths” and lower-density “mini-Neptunes” with substantial volatile content. 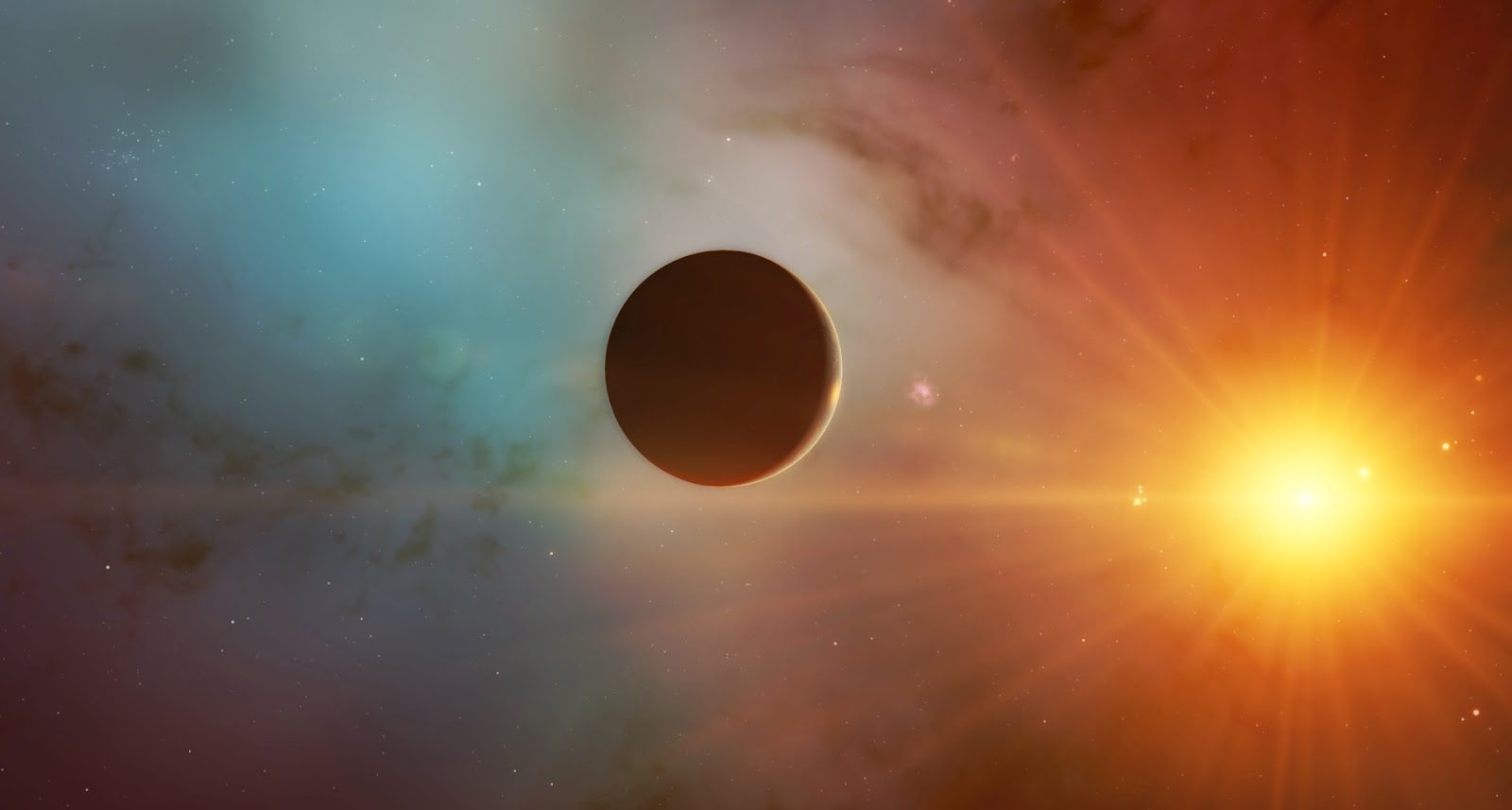 The outermost of the three planets, designated as planet “d”, is 1.5 times the size of Earth and receives somewhat more insolation from its host star than Earth receives from the Sun. This places the planet at the inner edge of the habitable zone where temperatures might be cool enough for the planet to support Earth-like conditions, and possibly life. If temperatures turn out to be too hot, then the planet is more likely a super-Venus with conditions too inhospitable for life.

All three planets around EPIC 201367065 are probably tidally-locked. This means the same side of each planet always faces the host star (i.e. permanent day and night sides). Since M dwarf stars are much cooler and fainter than the Sun, a planet around an M dwarf star needs to be much closer-in to get a similar amount of insolation as Earth gets from the Sun. As a result, the planet experiences stronger tidal forces from the host star and is expected to be tidally-locked.

A study by Yang et al. (2013) suggests that a tidally-locked planet can support thick water clouds on its dayside as the high amount of insolation drives strong dayside convection. The water clouds reflect away incoming radiation from the host star, leading to lower surface temperatures. If such a stabilizing cloud feedback mechanism works on planet “d”, then its surface temperatures can be lower than would otherwise be, allowing the planet to support cool and clement conditions even though its receives somewhat more insolation than Earth.

The trio of planets around EPIC 201367065 can be conveniently studied in further detail as the host star is relatively bright and nearby. Both the Hubble Space Telescope (HST) and the upcoming James Webb Space Telescope (JWST) have the capabilities to reveal more about this planetary system. Such a discovery so early in the mission shows the ubiquity of planetary systems and that the K2 mission will extend the legacy of Kepler for years to come.