HD189733b is an exoplanet that is slightly more massive and slightly larger in size than Jupiter. However, HD189733b orbits very close to its host star, going around it once every 2.22 days. During each orbit, HD189733b will transit in front of its host star. The proximity of HD189733b to its host star means that the planet is expected to be tidally-locked. As a result, the planet has a permanent substellar point on its day side where the planet’s host star is always directly overhead. 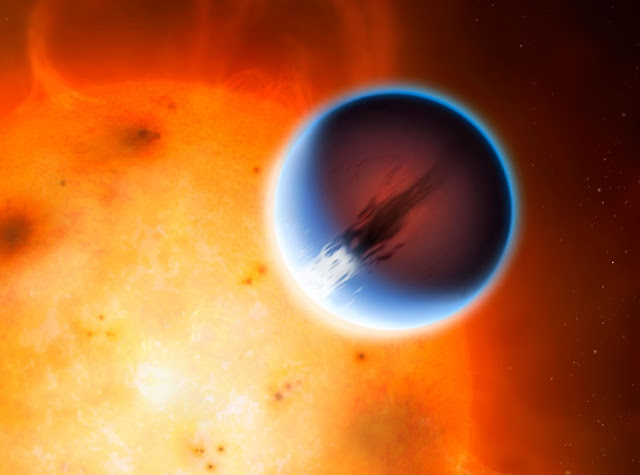 By studying data from a transit observation of HD189733b made with the High Accuracy Radial Velocity Planet Searcher (HARPS) on the European Southern Observatory’s 3.6 m telescope at La Silla, Chile; Louden & Wheatley (2015) present wind velocity measurements on the leading limb (90 degrees west of the substellar point) and trailing limb (90 degrees east of the substellar point) of HD189733b.

Since HD189733b is tidally-locked, its rotation period is the same as its orbital period of 2.22 days. As a result, based on rotation alone, both leading and trailing limbs will have symmetric red and blue shifts of 2.9 km/s. When these rotational velocities are subtracted from the measured velocities, the planet’s leading limb has a westward excess velocity of roughly 0.6 km/s and the planet’s trailing limb has an eastward excess velocity of roughly 2.4 km/s.

This study shows that the atmosphere of HD189733b has a strong eastward motion, with winds racing at over 2000 m/s from the intensely heated day side to the night side. Such an eastward motion also explains why the region of peak temperature on HD189733b is displaced 30 degrees east of the substellar point.

Figure 2: The posterior distributions of atmospheric velocities from the analysis. The leading limb (left) is red shifted by roughly 2.3 km/s and the trailing limb is blue shifted by roughly 5.3 km/s. The average velocity (middle) is found to be blue shifted with a velocity of roughly 1.9 km/s. The strength and direction of the velocity sets are consistent with a combination of tidally-locked rotation and an eastward equatorial jet that is seen crossing from the day side to the night side of the planet on the trailing limb. Louden & Wheatley (2015)