Temperature Inversion in the Atmosphere of WASP-33b 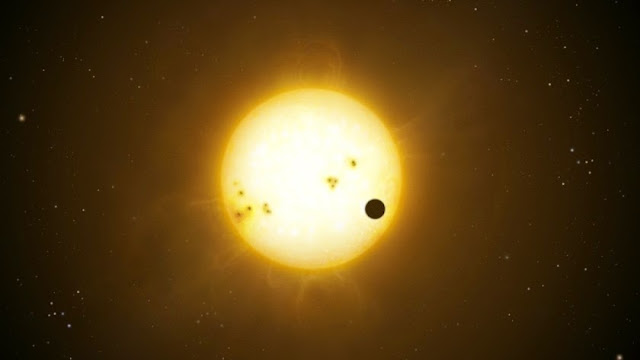 Circling a hot A-type star in a very close-in orbit every 1.22 days, WASP-33b is the most intensely irradiated hot Jupiter found to date. Due to its proximity, WASP-33b is tidally-locked, with the same hemisphere always facing its host star. Previous studies have suggested that highly-irradiated hot Jupiters can support temperature inversions (i.e. temperature increases with altitude) because molecules such as titanium oxide (TiO) and vanadium oxide (VO), in their gaseous form, can strongly absorb the incoming stellar radiation. However, temperature inversions may not be present in the atmospheres of some hot Jupiters if TiO and VO cannot remain aloft in the atmosphere due to gravitational settling and condensation. 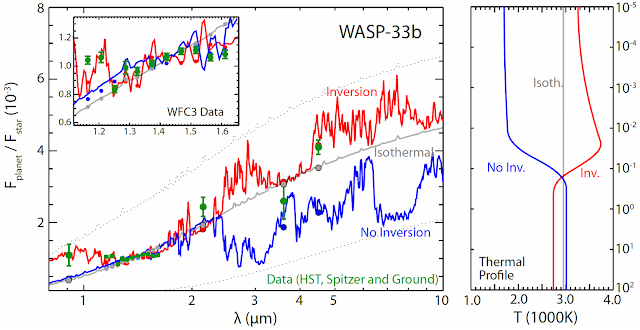 Figure 2: The left panel shows the observed and model thermal emission spectra of WASP-33b. The observed WFC3 spectrum is shown in green in the 1.1 to 1.7 μm range, also shown in the inset. All the other photometric observations outside the WFC3 range from previous studies are also shown in green circles with error bars. The solid curves show three best-fit model spectra corresponding to three model scenarios: model with a thermal inversion (red), model without a thermal inversion (blue), and model with an isothermal atmosphere (grey). The gray dotted lines show two blackbody spectra of the planet at temperatures of 1600 K and 3800 K. The corresponding coloured circles show the models binned at the same resolution as the data. The right panel shows corresponding model pressure-temperature profiles. The best-fit model with (without) a thermal inversion is shown in red (blue), and the best-fit isothermal model is shown in grey. Mandell et al. (2015).