A spacecraft propelled by a deuterium-tritium (D-T) nuclear pulse propulsion system can enable fast manned interplanetary spaceflight. The concept involves igniting tiny D-T thermonuclear targets to create a continuous series of thermonuclear micro-explosions. In D-T fusion reactions, the production of energetic neutrons carries away 80 percent of the reaction energy. However, the prodigious amount of energetic neutrons means that large radiators are required to dissipate the heat generated from the absorption of neutrons by the spacecraft body. One way around that is to employ deuterium-helium 3 (D-He3) fusion reactions instead since D-He3 reactions do not produce neutrons. Nevertheless, helium 3 is a rare isotope and can only be obtained in sufficient quantities from the atmospheres of the giant planets in the outer solar system. 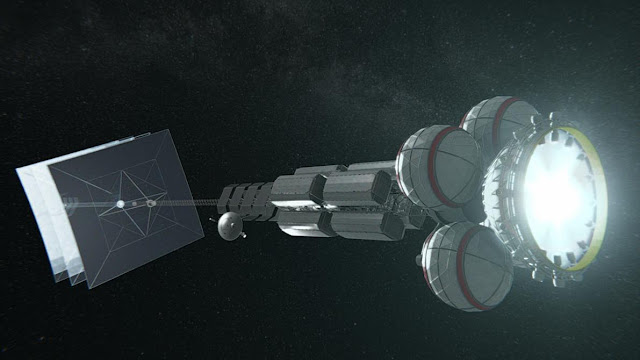 For space travel within the inner solar system, a means of nuclear pulse propulsion without requiring helium 3 is much desired. However, an advantage of inner solar system spaceflight is that very high speeds are not required. As a result, a modified form of D-T nuclear pulse propulsion can be used by igniting each D-T thermonuclear target within a sphere of neutron-absorbing liquid hydrogen. Although the propellant exhaust velocity will be much lower compared to a pure fusion reaction, it is already sufficient for rapid travel within the inner solar system. Equally important, this method also avoids the need for large radiators because the liquid hydrogen absorbs most of the neutrons.

The plasma is then confined by a magnetic nozzle and released as exhaust with a velocity of ~30 km/s. Such an exhaust velocity allows the spacecraft to attain the speeds required for rapid travel within the inner solar system. The energy output can be further increased by surrounding the liquid hydrogen sphere with a shell of neutron-absorbing boron. When boron absorbs neutrons, highly energetic α-particles are produced which increases the overall energy output. With an exhaust velocity of ~30 km/s, a spacecraft with 90 percent of its mass in the form of hydrogen fuel can accelerate to a final velocity of ~70 km/s. At that speed, a spacecraft takes about a week or so to travel from Earth to Mars. In comparison, conventional chemical rockets take several months to get to Mars.