Titan is the largest moon in orbit around Saturn and the second largest moon in the Solar System. Like the Earth, Titan has a fully developed atmosphere and stable bodies of liquid on its surface. Titan’s atmosphere is both denser and more extended than the Earth’s. Opaque haze layers within the atmosphere obscure the entire surface of Titan, making Titan appear as a featureless globe from afar. The first ever close-up image of Titan was taken by Pioneer 11 in 1979. Subsequently, both Voyager 1 and 2 flew-by Titan in 1980 and 1981 respectively. The Cassini-Huygens spacecraft arrived at Saturn in 2004 and started mapping the surface of Titan by radar. On 14 January 2005, the European Space Agency’s (ESA) Huygens probe landed on the surface of Titan, making Titan the second moon to have a man-made object land on its surface. 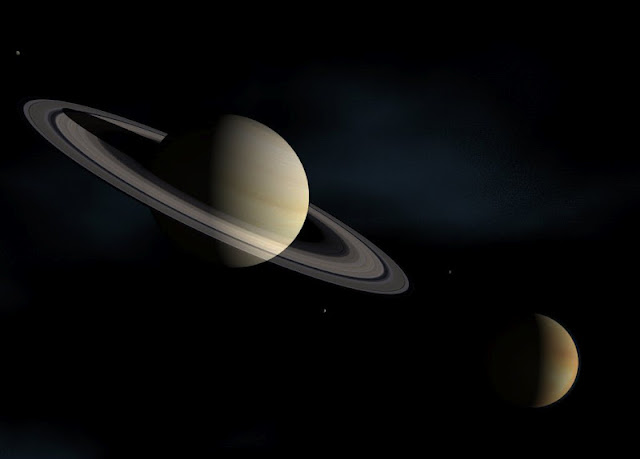 An artist’s conception of Titan with Saturn in the background. (Credit: Kees Veenenbos)
The Aerial Vehicle for In-situ and Airborne Titan Reconnaissance (AVIATR) is a proposed Titan airplane mission. Its primary component is a 120 kg Unpiloted Aerial Vehicle (UAV) that will fly in the atmosphere of Titan for a planned mission duration of one Earth-year. Titan is the best place to fly an airplane in the whole Solar System because its atmosphere is 4 times denser than the Earth’s and its gravity is 7 times weaker than on Earth. The high atmospheric air density and the low gravity make it much easier for an aircraft to maintain lift as less power is required. 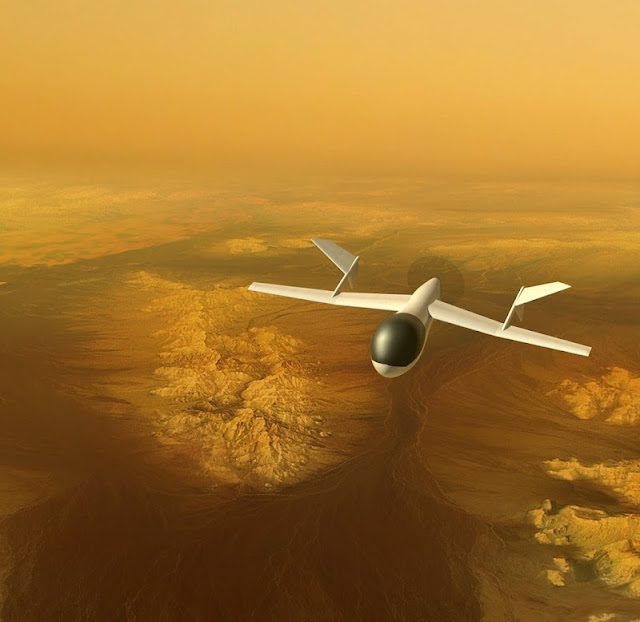 An artist’s conception of AVIATR, an airplane mission to Titan. (Credit: Mike Malaska 2011)
The low power requirements make it feasible for the UAV to be powered by electricity generated from a pair of Advanced Stirling Radioisotope Generators (ASRGs). An ASRG generates electricity from heat produced by the decay of radioactive plutonium-238. Given that the half-life of plutonium-238 is 87.7 years, an ASRG can provide adequate power for a very long period of time. Compared to a Radioisotope Thermoelectric Generator (RTG), an ASRG requires 4 times less plutonium-238 to produce the same amount of useful power. Based on a conservative estimate, the pair of ASRGs is expected to produce 254 watts of power. For this mission, solar energy cannot be employed due to the scarcity of available solar radiation.
Exploring Titan from an airplane has a number of advantages over a balloon. An airplane is able to fly much faster than a balloon and this allows the airplane to constantly fly on the sunlit side of the moon to maintain direct and continuous communication with the Earth. From Titan, the Earth will always appear no more than 6.5 degrees from the Sun. A balloon’s flight path is largely determined by the direction of atmospheric winds. However, an airplane is much more robust against atmospheric winds and it can be directed to study specific regions. This makes it more desirable for an airplane to visit places such as the poles where Titan’s most violent meteorological activities tend to occur. Furthermore, a traditional hot-air balloon on Titan will require much more power that what an ASRG can provide.
Titan’s thick and extended atmosphere means that a spacecraft that is in orbit around Titan must maintain a distance of over 1000 km from the surface as atmospheric drag at lower altitudes will cause the orbit of the spacecraft to rapidly decay. In comparison, a spacecraft in orbit around Mars can come within 300 km from the Martian surface and this is favourable for the spacecraft to obtain high resolution images. As such, close-up imaging of Titan’s surface to obtain high resolution images cannot be fully realised using an orbiting spacecraft. For this reason, an airplane is more desirable for obtaining high resolution images of Titan’s surface. The UAV used for the AVIATR mission will climb up to 14 km altitude and descend down to 3.5 km altitude once per Earth day. An onboard radar altimeter will be used to measure the UAV’s height above the ground within the altitude range of 0 to 15 km.
The UAV communicates directly to Earth using a steerable high gain parabolic antenna that is contained within a streamlined aerodynamic fairing. When the UAV is not transmitting data back to Earth, it can use the excess power to climb to a higher altitude. This allows the excess energy to be stored as gravitational potential energy so that when data is required to be transmitted back to Earth, extra energy can be obtained by reducing power to the UAV’s propeller and allowing the UAV to descent in altitude. Such a technique acts as a ‘gravity battery’ for the UAV.
A total of 7 science instruments will be fitted on the UAV. To take advantage of the mobility and flexibility of the airplane, the cameras are fitted to the body of the airplane such that the cameras are pointed by tilting the aircraft. Because of this feature, there are no moving parts in any of the science instruments. 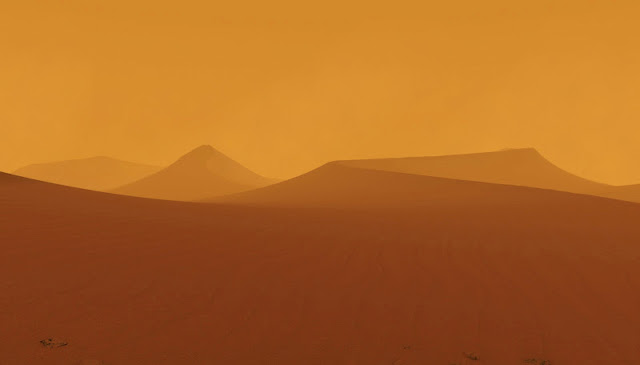 An artist’s conception of Titan’s sand dunes. (Credit: Walter Myers)
Titan, Venus, Earth and Mars are the only 4 worlds in the Solar System that have both well developed atmospheres and solid surfaces. Strong interactions between the surface and the lower atmosphere are prevalent in each of these 4 worlds. Furthermore, Titan, Earth and Mars have numerous surface features that are sculptured by fluvial erosion. The large number and complexity of processes acting on Titan gives rise to a diversity of surface landforms that rivals the Earth. Titan is also the only other place in the Solar System where it rains. The primary objective of AVIATR is to explore the surface of Titan and its lower atmosphere. Therefore, the scientific goals of AVIATR can be categorized into surface geology or atmospheric science.
1.         Surface Geology
1.1       Lakes and Seas
a.         Understand sea/land interactions from diversity of shoreline interfaces.
b.         Characterize atmosphere/lake interaction from wave dynamics.
c.         Determine lake histories from shoreline changes and layering.
d.         Constrain flux of liquids and sediments into and inside of lakes.
1.2       Hydrology
a.         Characterize erosion using the diversity of channel bedforms.
b.         Determine where currently extant surface liquids exist and why.
c.         Assess the nature and efficacy of sediment transport from streambeds.
1.3       Dunes
a.         Ascertain the present state of activity in Titan's dune fields.
b.         Measure the wind and climate regime for dune formation and evolution.
c.         Infer climatic changes over varying timescales from compound dune forms.
d.         Study the global cycle of aeolian sediment production and transport.
1.4       Mountains
a.         Determine the faulting regime that creates Titan's mountains.
b.         Infer geological and climatic history from layering exposed in mountain faults, incised channels, and craters.
c.         Evaluate the cryovolcanic nature of proposed flow features.
1.5       Exploration
a.         Explore the mid latitude “blandlands” and other areas not well explored.
b.         Identify potential landing sites of scientific interest and constrain safety.
c.         Search for prebiotic molecules and     evidence for astrobiological activity.
2.         Atmospheric Science
2.1       Winds & Structure
a.         Trace global circulation via measurement of zonal and meridional winds in the troposphere.
b.         Constrain the methane cycle by measuring the global atmospheric transport patterns of methane.
c.         Understand the diversity of atmospheric stability in the context of global circulation.
2.2       Clouds & Rain
a.         Characterize clouds' diversity using particle number densities.
b.         Constrain global circulation and cloud formation by determining clouds' vertical structure and time evolution.
c.         Ascertain where, when, how often, and how intensely it rains on Titan.
2.3       Haze
a.         Measure the spatial variability of haze scattering properties.
b.         Constrain global patterns of haze production, transport, and time evolution.
c.         Constrain the rate of haze sedimentation on Titan's surface. 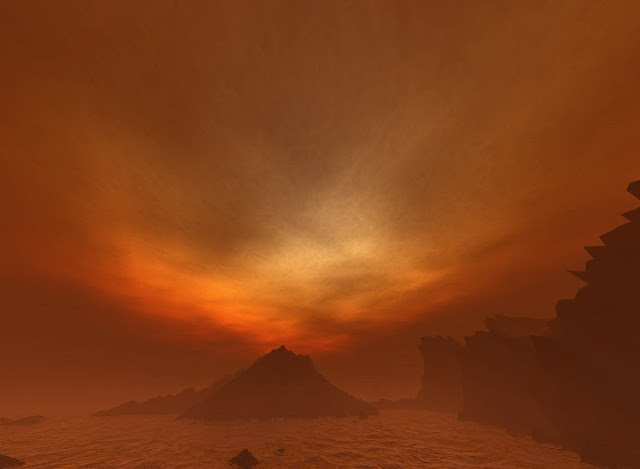 An artist’s conception of Titan’s hydrocarbon sea. (Credit: Kees Veenenbos)
The AVIATR spacecraft stack consists of the space vehicle and the entry vehicle. Encapsulated within the aeroshell of the entry vehicle is the UAV. Key components of the entry vehicle consists of an ablative Thermal Protection System (TPS) and a parachute subsystem consisting of a supersonic drogue parachute, a subsonic main parachute, a deployment mortar and a parachute containment can. The space vehicle is a purpose-built cruise stage that is mounted to the aft-body of the entry vehicle. Key components of the space vehicle include a 110 cm diameter spherical titanium propellant tank, one 445 N rocket thruster for high velocity change manoeuvres and a Guidance, Navigation, and Control (GN&C) subsystem.
An Atlas V launch vehicle will be used to launch the entire AVIATR spacecraft stack into space. The AVIATR mission design trajectory involves a 7 years and 8 months cruise between Earth and Titan. During the cruise phase, the spacecraft will make one flyby of Earth and one flyby of Jupiter. Before the entry vehicle enters Titan’s atmosphere, it separates from the space vehicle by the firing of pyrotechnic bolts. The entry vehicle will enter Titan’s atmosphere at a relative velocity of 5.72 km/s and then decelerate for 270 seconds to the parachute deployment speed and altitude of Mach 1.5 and 175 km respectively. A supersonic drogue parachute is deployed which decelerates the entry vehicle to Mach 0.5. Subsequently, the main parachute is deployed which slows the entry vehicle to a terminal velocity of 20 m/s where the heat shield is jettisoned and the UAV is released to begin flight operations.
AVIATR is likely to operate well beyond its one year nominal mission duration. This is because there are no expendables that pose a limit to the total flight time of the UAV except for the slow decay of radioactive plutonium-238 in the ASRGs. For this reason, the UAV is expected to keep flying until a mechanical failure occurs or until funding terminates.
Reference: Jason W. Barnes et al. (2011), “AVIATR - Aerial Vehicle for In-situ and Airborne Titan Reconnaissance”
Posted by Koh Xuan Yang at 12:59 AM
Email ThisBlogThis!Share to TwitterShare to FacebookShare to Pinterest
Newer Post Older Post Home